Sunday, August 28.  First, I must say that today's post is going to be a bit disappointing.  While I brought both my new digital work camera and high def video camera, I did not bring the jacks for either, so I do not have any images that I can post for today.  Sorry.  They will need to wait until tomorrow.

May I also say that today hardly felt like Sunday.  Having our free day on what is always going to be my gut sabbath is strange, but having it not feel like Sunday helped me not miss being in Choir so much.  All I have heard about today's Music and the Spoken Word broadcast was a Facebook message about their being an awful lot of roll-over images.

Early this morning my colleagues Steve Harper and Jared Ludlow and I joined the director, Eran Hayet, and the outgoing academic associate director, Ray Huntington, on a whirlwind tour of northern sites.  For most of our weekly field trips, which are a bus ride away from Jerusalem, the faculty can usually go to the sites a week in advance to do our pre-tour and get prepped to take the students there.  Galilee and northern Israel are rather different.  For almost two weeks, our program will actually relocated to a kibbutz on the eastern short of the Sea of Galilee called Ein Gev, which we will use as both our classroom for much of our NT gospels instruction and as a base for daily tours to sites in this area.  Since this area is 90 miles (or more) away from Jerusalem, we cannot get up here again and again for preparatory visits.  So today we whipped through an number of sites and tomorrow will finish up with the major Christian sites in Galilee.


Because I do not have any pictures available to upload, the best I can do is provide you a map of the territory that we covered today - it was a lot! 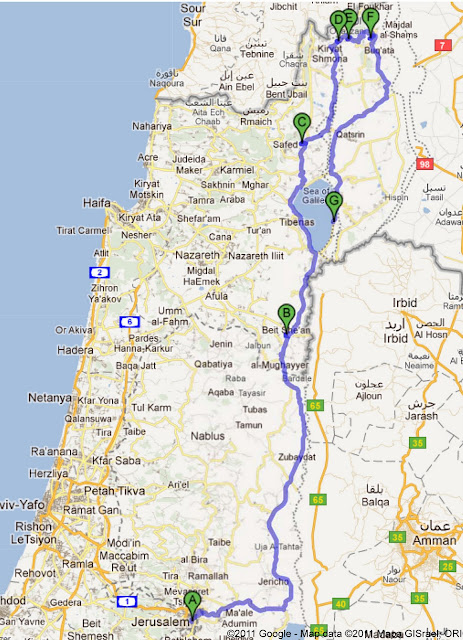 The points on the map may be too small to see on the blog, but our itinerary was as follows:

Left Jerusalem (A) at about 6:30.   We then drove along Israeli-controlled roads in Palestine through the West Bank down to Jericho and then up the Jordan River Valley.

Soon after we reentered Israel proper just south of the Sea of Galilee, we went a bit west to the site of Bet She'an (B)., which was known as Scythopolis in the Hellenistic and Roman periods.  That was because it was in those periods a Greek city of the Decapolis, later somewhat Romanized.  Its ruins boasted a great theater, two bathhouses, a colonnaded street, an agora or marketplace, and much else that made this erstwhile Classicist very happy.

Next we drove up to the Sea of Galilee, skirting its west coast and going through the large city of Tiberias.  We then went north to the site of Hazor (C), a great Canaanite city destroyed by Joshua and later refortified by Ahab of the northern kingdom of Israel.  It was later destroyed by the Assyrians and not rebuilt.

Our next few sites were in the extreme north of Israel, sandwiched between Lebanon and Syria (I am sure that trills my Mother!).  The first was Dan (D), where the tribe of Dan relocated during the time of the Judges and which served as a site of Jeroboam's alternative cult (calves in Dan and Bethel) after the division of the Solomonic kingdom.  The other was Panias (E), a water shrine known as Caesarea Philippi in the NT gospels, where Peter made his famous declaration that Jesus was the Christ, the Son of God (Matt 16:16).  We then visited a Crusader fortress known as Nimrod's Castle (F) before ascending another height that was the scene of terrible fighting in the 1967 and 1973 wars against Syria.  You'll get pictures of this border tomorrow.

Driving across the occupied (and annexed) Golan Heights, we at last came down to the Sea of Galilee till we got to our rooms in the kibbutz of Ein Gev (G) on the eastern shore of the lake.  We had planned to swim a bit, but we got here rather late and the waters were choppy (can you sing, "Master, the Tempest is Raging?").  Instead we had a wonderful fish supper on a wharf.  The type of fried fish we ate was actually called "St. Peter's Fish!"

At dinner we were joined by an Israeli named Eric (never got his last name) who was from New Jersey but "made aliyah" (formally immigrated as a Jew under the Law of Return) some 30 years ago.  He leads our students on a hike up to a Golan spring when they are here, and he had many interesting things to tell us about kibbutz life, social and economic philosophy, and history.  We sat there in that picturesque restaurant on a famous sea talking about interesting things until rather late in the night.

Back at home in Jerusalem, Elaine and the children survived another day.  She and the other faculty wives made their first foray to the Arab money changer who cashes our American checks.  After a strange experience getting shekels, she went to a couple of stores, including an Israeli grocery store that was only somewhat better than the Arab one we had gone to Friday.  It was larger and a little bit more familiar, but crowded with pushy ladies with hordes of children.  Finally home to the center, she took the children around the center some more and let them play in the gym: Samuel was happy to play some basketball at last.  Back home, she decompressed by watching Toy Story 3 with them (and napping quite a bit).  I continue to feel a bit awkward that I am having these great historical experiences (and tomorrow they will be spiritual as well), while she must daily deal with the often challenging realities of setting up and managing a household here.
Posted by Eric D. Huntsman at 1:47 PM