As soon as Steve and I finished teaching, we got our field clothes on and joined Kent and Jared for a faculty outing to sites outside of Bethlehem that we do not usually get to visit.  We were driven by Hassan, one of our usual Palestinian drivers, and accompanied by Mamoud, one of our security personnel. 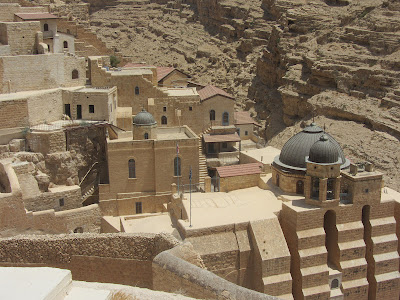 Our first stop was at Mar Saba, arguably one of the oldest Christian monasteries in the Holy Land and one that has been in almost continual use since it was founded in the early fifth century.  For about 1,529 years, Greek Orthodox monks haven lived in or around this desert monastery, where they came to get away from the world and get close to God, devoting their lives almost completely to prayer.

The monastic community, or lavra as it is called in Greek, was found by an early saint named Sabbas, who came from Cappadocia in central Turkey.  From the age of 17-30, Sabbas lived in other monasteries.  He was then blessed to begin the life of a "cave hermit" and selected a cave in the lower Qidron Valley, quite away below Jerusalem and east of Bethlehem beyond the modern village of Ubeidya.  Other monks followed his example, and soon there was quite a community of hermits living in caves in the area.

Then one night, Sabbas looked out of his cave and saw a pillar of fire striking the side of the Qidron across the valley.  The next morning he went and found a church-shaped cave, which he pronounced to be "a church built by God."  This cave-church still forms an important part of the monastery.  The main sanctuary is now the large Theotokos Church dedicated to the Virgin Mary.

The monastery was destroyed during the Persian invasion of  614, and the skulls of the monks who were killed then are preserved in the cave church as "holy martyrs."  It was further raided in the early Islamic Period and then later by bedouins in the Turkish period, but it has otherwise been continuously occupied and has maintained its old traditions. 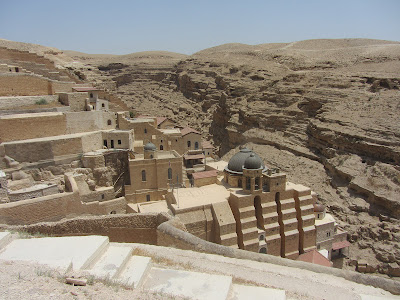 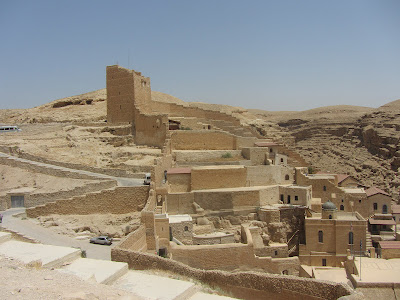 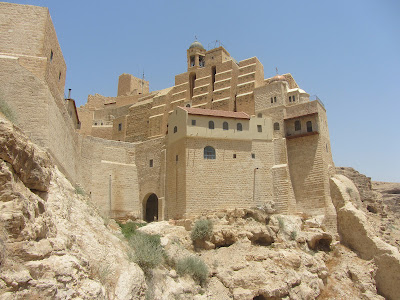 No women are allowed in the monastery, nor are pictures allowed inside but this link to the  BibleWalks site) has some pictures of the icons, the churches, and the tomb of St. Sabbas.  We were guided by Father Lazarus, a remarkably devout monk who was born in Connecticut, converted to Orthodox in California, and was "led by God" to come to Jerusalem and then to this monastery, where he plans to spend the rest of his life.  He is one of 16 monks currently in residence. 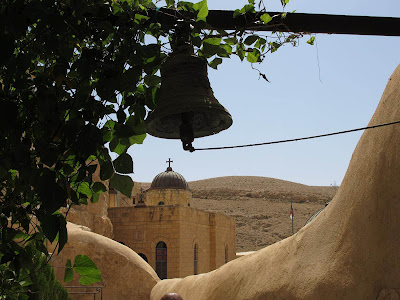 After completing our tour of the inside of the monastery, we hiked up and around the entire site, which is dominated by two towers.  We then climbed down into the deep Qidron Valley, which has a rushing stream at the bottom, which, unfortunately, it not of fresh water but rather consists of barely-treated sewage from Jerusalem and the Palestinian towns above us.  Crossing the stream on a bridge (and holding our noses!), we then climbed up the other side of the wadi, where we went to walked around many of the original hermit caves, including the original one of St. Sabas. 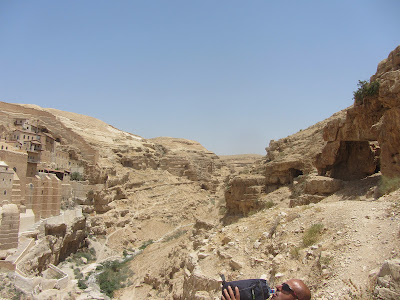 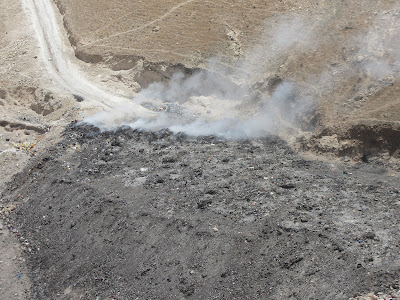 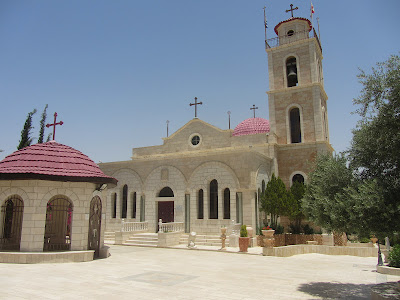 As we returned to Bethlehem, we passed through Beit Sahour, which means "House of the Night Watch."  This name alludes to the fact that it is the traditional site of Shepherds Field, where the shepherds were abiding with their flocks by night when the angels announced the good tidings that Jesus had been born.  When we were in Bethlehem with students on March 13 we visited for the first time Khirbet Siyar el-Ghanem, the Catholic church commemorating the shepherds.  We also stopped at the Orthodox church of Kenisat er-Ruwat, but it was closed.  Today we were able to visit the relatively new Orthodox church here as well as walk through the remains of early churches----built in the fourth, fifth, and sixth centuries---that were built over a cave that may well be the one identified by Helena in the early fourth century as the place where shepherds received the glad tidings. 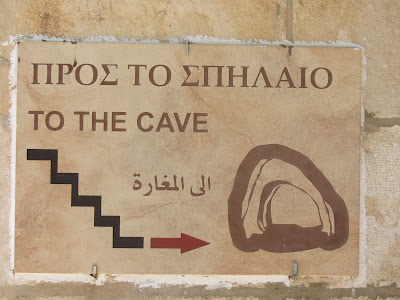 Holy Land alumni and alumnae will appreciate this picture of the place where we had lunch in Bethlehem. 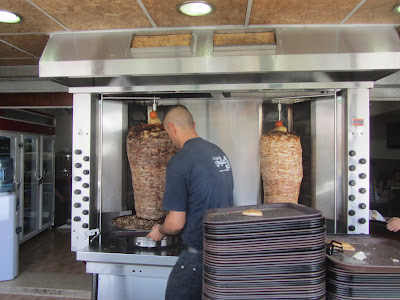 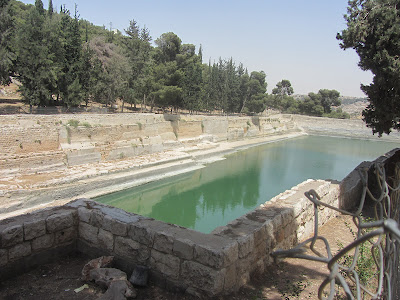 For some time I have wanted to visit a site south of Bethlehem known as Solomon's Pools.  These water works actually had nothing to do with Solomon; they were built first by the Hasmoneans and then expanded by Herod and refined by the Romans.  These pools are actually huge, open-air reservoirs that were built by damming up a narrow valley at three different spots and then facing the resulting pools with rock and plaster.  Bethlehem is higher in elevation than Jerusalem, and Hebron to the south is higher still.  These pools gathered water from springs between Bethlehem and Hebron, and then force of gravity carried the water down to Jerusalem. 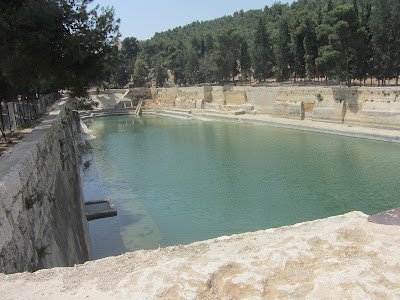 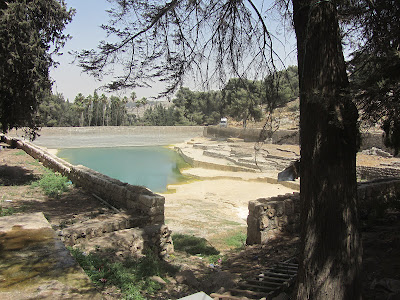 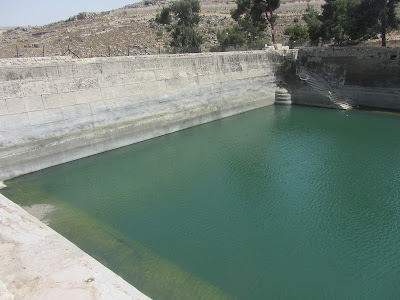 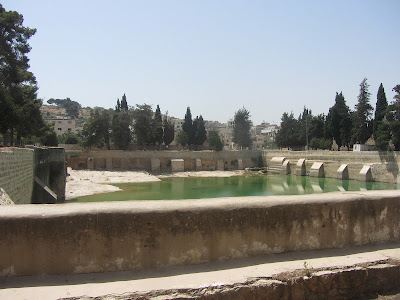 Amazingly, these pools continued as a vital part of Jerusalem's water supply system until the early modern period.  On one side of the pool we found pump houses built in the early twentieth century by the Turks with great German and British pumps in them. 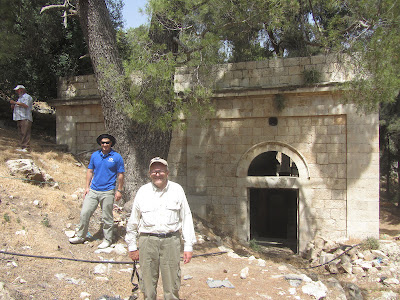 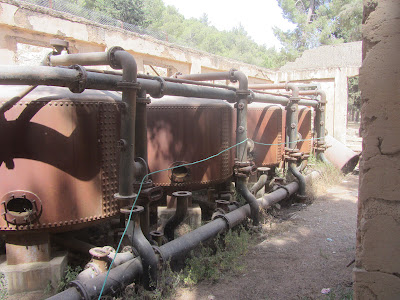 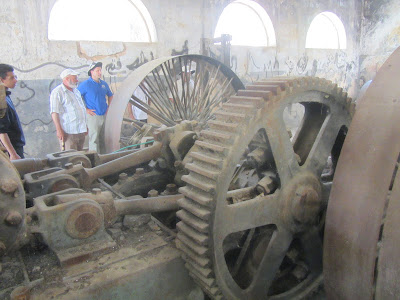 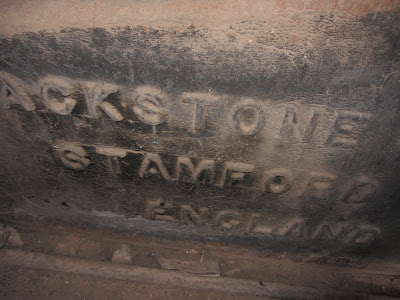 A Turkish fort once guarded the pools. This fort has been included in a new Palestinian Authority redevelopment project, and the fort is being converted into a museum.  While it is not open for the public, the guards and the director let us in to see some of the developing collection, which included artifacts from the Bronze Age all the way through the Turkish and British periods. 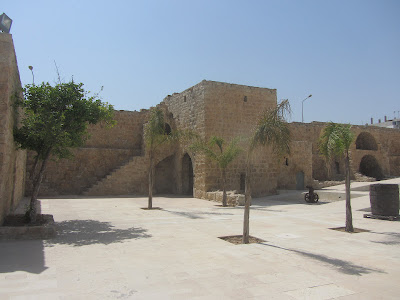 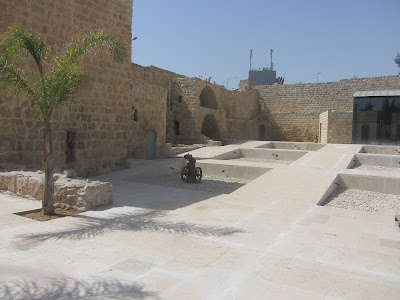 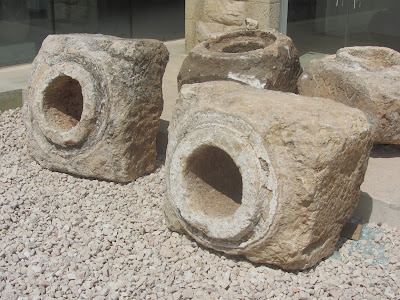 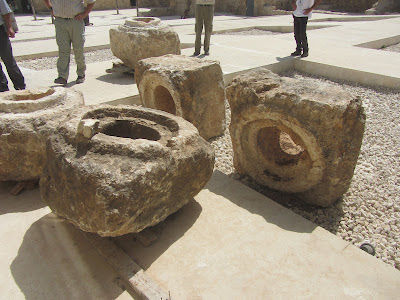 
As we left Bethlehem, we were able to stop at a site I have wanted to see for a LONG time.  This is the traditional site of Rachel, the favorite wife of the patriarch Jacob.  This was once a small, domed Muslim shrine in the countryside hills on the road to Hebron.  Gradually over the last century and a half, it became an important pilgrimage site for Jews.  Caught up in the struggle between Israelis and Palestinians, the tomb was supposed to be on the Palestinian side of the Separation Barrier.  But to provide Jewish access, a single road with high walls on both sides projects into Palestinian-controlled territory to the shrine.  The original small shrine is not completely enclosed in a much larger, modern building. 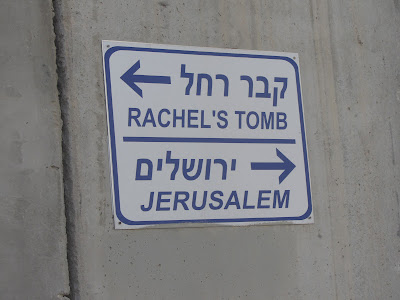