As always, crossing into Jordan took quite a while.  The border crossing is not much more than 40 minutes away from Jerusalem, just past Jericho at the King Hussein Bridge (formerly the Allenby Bridge Crossing).  One travels through a number of Israeli checkpoints and then switches buses, boarding a Jordanian bus that took us to the Jordanian entry point and then served as our coach for our tour of Jordan.  We received Israeli exit and entry stamps in our passports at Allenby but not from Jordan, which considers the border provisional because the West Bank is intended to be an independent Palestinian state.  Instead a group list issued by our travel agency was stamped. 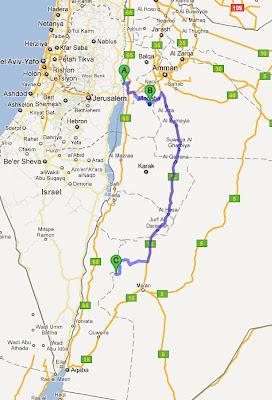 Our guide for this tour, as in my previous two, was Yousef Zukrat.  He has become a good friend, and I am always glad to see him again and have him show us around his country.  Our driver this trip was a friendly Jordanian of Palestinian origin named George.  His family is Christian (Catholic), and he was born in Ramallah in Palestine before his family fled to Lebanon and finally found refuge, and citizenship, in the Kingdom of Jordan.

After finally making it through immigration, the first place we went is Mount Nebo, where Moses had a view of the promised land at the end of Deuteronomy 34.  The Franciscans are in the process of rebuilding an early Christian basilica on the site.  The haze in the Jordan Valley below us did not allow us a particularly good view of Jericho and the Promised Land beyond us, but it afforded us a good opportunity to talk about the mission of Moses, including his post-mortal role at the Mount of Transfiguration and the Kirtland Temple.  To commemorate that, we sang a rousing chorus of "The Spirit of God." 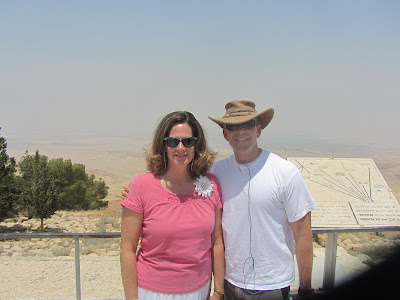 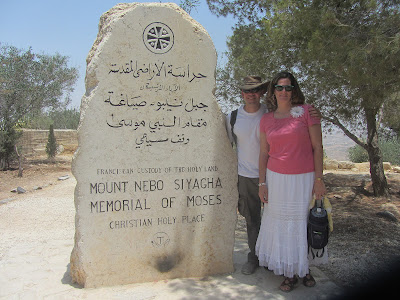 The modern Jordanian city of Madaba was the Old Testament Moabite city of Medeba, which went back and forth between Moab and the tribe of Reuben.  In the Byzantine period, it had an important church that featured a detailed map of the Holy Land on its floor made of mosaic.  While much of it is damaged, a well-preserved section shows Jerusalem as it would have looked in its Christian period.  We then had a buffet Arabian meal at the familiar Dana restaurant.


Our guides were anxious to get us to the church first and the restaurant second because of some troubles in the town that they were aware of.  Sometime last week, intertribal fighting had resulted in a man's death, and his tribe was seeking satisfaction.  Just hours after we left, security forces closed the town down because of rioting, but all was quiet while we were there. 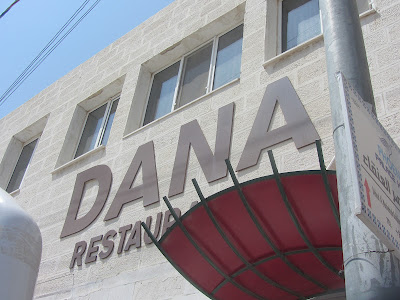 The other site we stopped at on our first day was Machaerus (modern Muqāwir).  This was a fortress built by the Hasmonean king Alexander Jannaeus a century or so before Christ.  The fortress was expanded by Herod the Great, who also furnished it with a luxurious palace.  When Herod's kingdom was divided at his death. the region east of the Jordan River, then known as Perea, was given, along with Galilee, to his son Herod Antipas.  This was the Herod who had John the Baptist arrested and beheaded, and it very likely occurred at this site.

It is quite a hike up to the top of the high hilltop where the remains of Machaerus lie, the first of several long hikes that took Elaine by surprise, particularly because of the oppressive heat.  But at the top we had a nice devotional together after I told the students the history of the site.  We talked about the mission of John the Baptist and why, as the immediate forerunner and witness of Jesus, he was "the greatest of all the prophets."  We talked about his connections to Elijah, his courage in preaching repentance (even at the risk of his life), and his post mortal career as the one who restored the Aaronic Priesthood to Joseph Smith and Oliver Cowdery.  We then sang "Faith of Our Fathers."

The Drive to Wadi Musa

We then had a long drive ahead of us, some on back desert roads and finally on a (fairly) modern highway down to our hotel in Wadi Musa, next to tomorrow's site at Petra.  On the way we stopped for some pictures of the stunning view of the sun setting on the desert horizon. 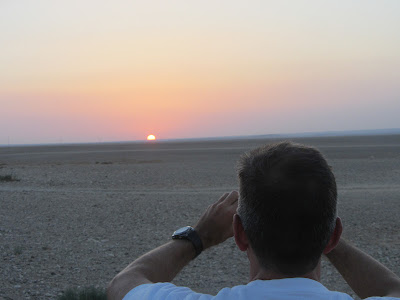 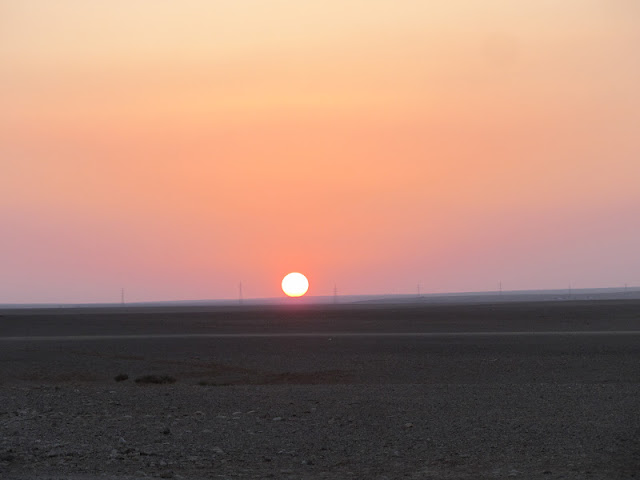 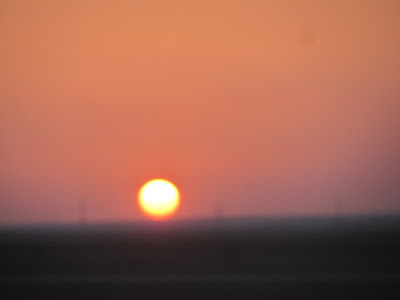 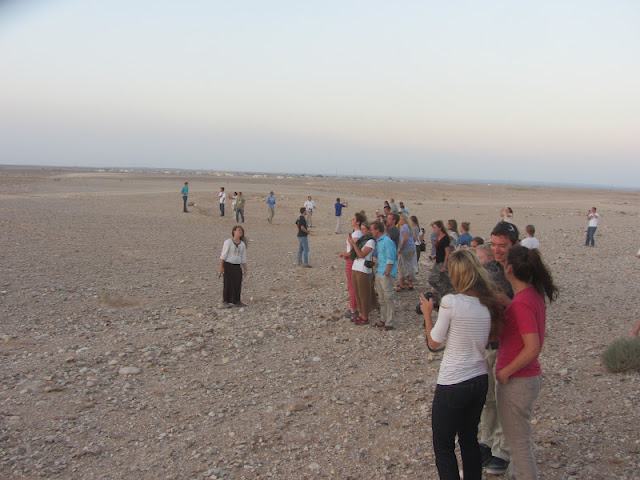