A couple new sites in Palestine 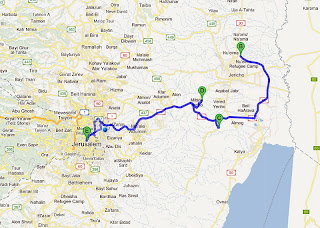 Most weeks last semester, we had a faculty "field trip prep" on Thursday or Friday to get us ready for the sites to which we took the students the next Monday.  Because we are adding and/or changing a few sites on some of the trips, we may be doing some of that yet.  But otherwise we are using our field trip preps to visit sites and go places where we do not usually take the students, which falls under the rubric of "professional development" for us faculty.  On some of these, the center allows us to take our wives as well, so they can become nice outings.  This week, on Friday, January 13, we went down to Jericho, but while we were there we went to a site called Hishom's Palace (B).  We then visited a Muslim shrine called Nabi Musa (C) and then visited the Greek Orthodox monastery of St. George (D).

Our regular driver for permitted sites on the West Bank is Mahmoud, a Palestinian member of our security staff.  He drove us down and through Jericho, by all the sites were we will soon take the students: Tel es-Sultan (the dig on the site of Bronze Age Jericho, you know, where the walls came tumbling down), Elisha's spring, Herod's winter palace, etc.  Our objective today for this "extra" trip was Hishom's Palace, on of the best examples of early Islamic architecture in Palestine.  It was built soon after the Umayyads took the Holy Land from my beloved Byzantines.  This Arabian dynasty, which found itself transformed from a leading clan in Arabia to the fabulously wealthy lords of an Isalmic Empire that stretched across the Middle East and much of the Mediterranean, built great palaces and "estates" throughout Syria. Although originally attributed to Caliph Hisham bin Abed el-Malik (724-743), it is now thought that his heir el-Walid built it between 743-744. It was then believed to have been destroyed in the earthquake of 749, but an archaeologist from the University of Chicago whom we met there say that they now think it was occupied and used for centuries.


It was interesting because it included statuary and representative art that is usually thought to have been anathema to Islam.  The Greek, Roman, and Byzantine influences were apparent in the courtyard, the mosaics, and the bathhouse. 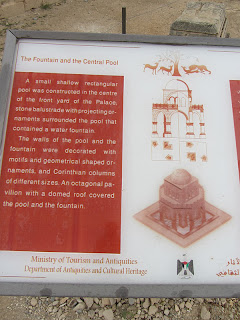 We then stopped on a mound of dirt that is the remains of Herod's theater and hippodrome in Jericho.  Somehow I did not get any pictures of this, but Margaret Ludlow shared this one of the three faculty (Steve was not with us that day) standing on top of the tell: it was a cold, rainy day! 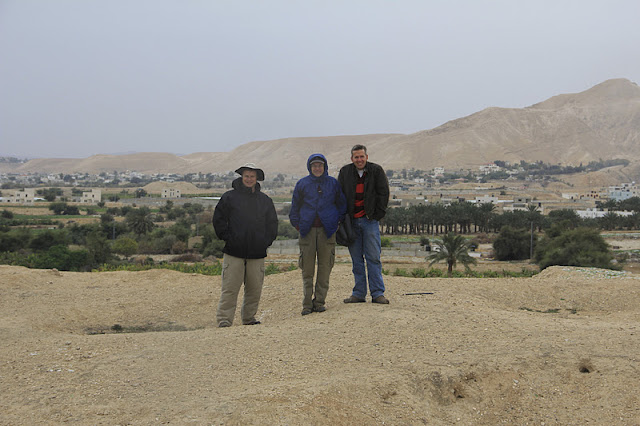 We then had lunch together at the "Temptation Restaurant" (so called because the traditional site of Jesus' temptations lay in Wadi Kelt above Jericho.  Failed to get pictures of our traditional mid east lunch, too.

We then drove to a site called An Nabi Musa, which is a Muslim shrine that is now believed to be the grave of Moses (though the Bible says he was buried at Mt. Nebo on the other side of Jordan).  Under the Mamluks and then continuing under the Ottomans, this shrine and pilgrimage hostel became the focus of a Palestinian yearly festival that was established partly to offset the Christian Holy Week celebrations each year.  Starting in Jerusalem, a procession went down to Nabi Musa for a a week-long series of feasts and ceremonies. 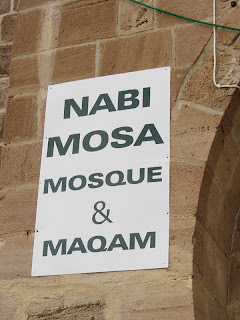 Our last stop was Wadi Kelt, a wadi or deep seasonal river bed, a canyon in many places, that runs from the Judean Hills down to the Jordan River at Jericho.  We have seen dozens and dozens of wadis since we have been here, but now that we are in the rainy season, we have finally seen one running with muddy, rushing water. 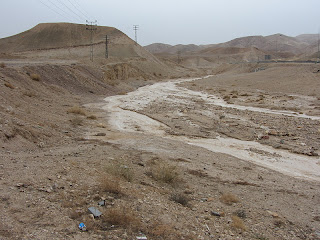 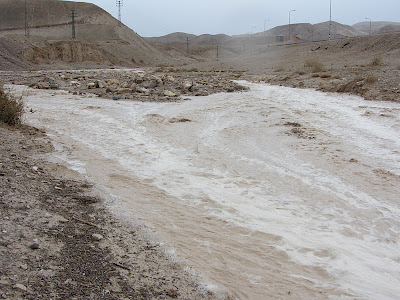 Anyway, Wadi Kelt is the site of a notable Greek Orthodox monastery dedicated to St. George.  We have often seen it before from above the wadi when we take the students to an overlook in the Judean Wilderness that is associated with the Lord's 40 days in the wilderness.  This is the first time that we were able to make the long hike down the wadi and then across a little bridge to actually visit the monastery. 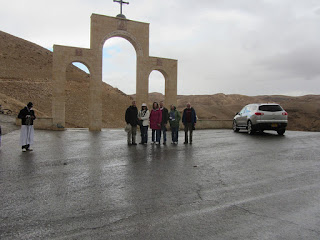 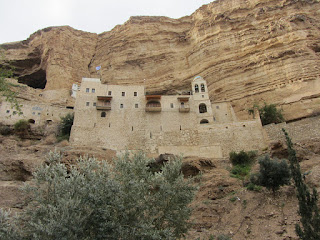 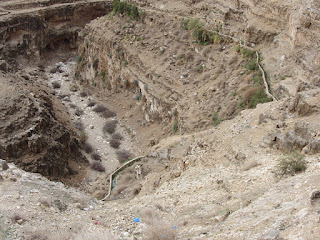 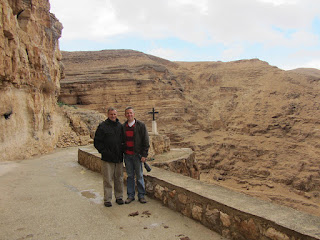 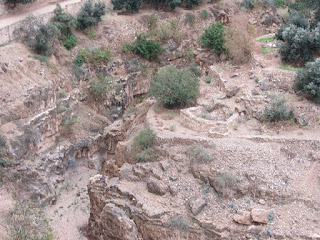 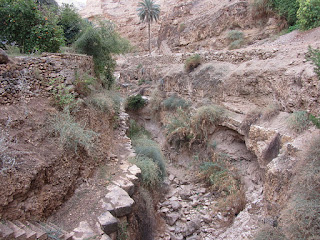 In the monastery we saw icons, ornate chapels, the graves of monks and patriarchs, saints' relics, the glass-encased body of a former abbot, and a grotto associated with Elijah's refuge in the wilderness. 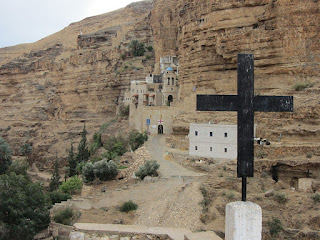 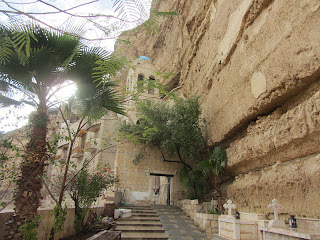 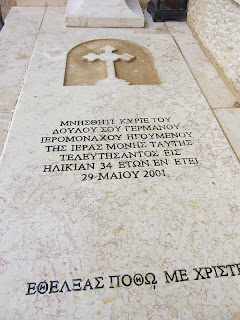 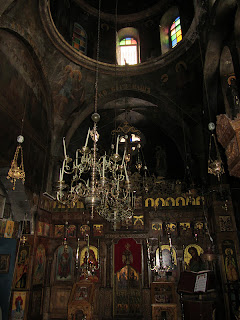 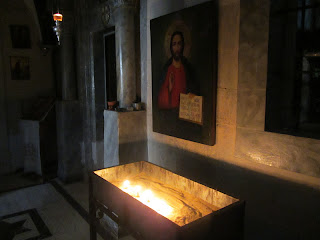 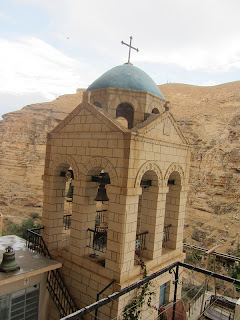