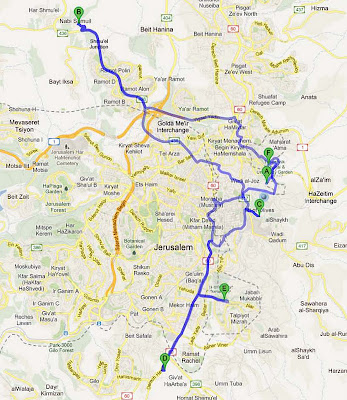 Today (1/9/12) we took our students on our first out-of-center field trip (they went on orientation walks last Thursday, but this is the first time we got them on a bus and took them to specific sites for the full treatment--reviewing the archaeology and history, reading pertinent scriptures, and often singing).  It is called the "Jerusalem Overlook" field trip because it consists mostly of sites around the city that give a good view of Jerusalem and the surrounding territory.

Note: Because I am now on my "second round" of all these sites, blog entries will usually not include as much historical background and other discussion.  Instead I will usually start an entry with a link to the last time we visited that particular site, and I will then post pictures of this group of students at that site.  However, my entry for last semester's overlook field trip was rather incomplete, and we went to a couple of places this time that we did not then . . . so hang on for a full entry once again this time.

The first site we went to today was Nabi Samwil, which is the traditional "Tomb of the Prophet Samuel north of Jerusalem.  Probably originally the "High Place" above the site of biblical Gideon, the Byzantines later established a monastery here, which they associated with the resting place of Samuel, even though that was actually in Rama, somewhat to the north and west. Later the Crusaders called the height Mont de Joie built a large castle here because it afforded them their first view of Jerusalem. The site dominates the approach to Jerusalem from the Ayalon Valley to the north, so the Crusaders built a strong castle here. 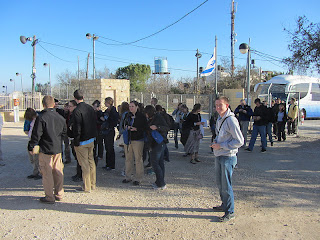 In 1730 the church of this castle was incorporated the village mosque, and since Islam venerates Samuel as an important prophet, they still honor him with a cenotaph (an empty, honorary tomb) in this mosque.  When Israel took the hill top in 1967, they opened a small Jewish synagogue in the basement, where a second cenotaph was established.  The mosque was not open to our students, but we did briefly visit the Jewish prayer room, with the men going on one side and the women on the other per orthodox Jewish practice. 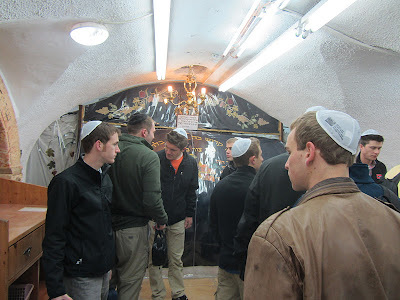 After we exited the building, we went to the north brim of the hill, which afforded us a view of the Benjamin Plateau, including the village of Al-Jib immediately below, the name of which reveals its origins as the Old Testament town of Gibeon.  My colleague Jared Ludlow discussed the geography and what we could see from that position, after which I reviewed pertinent biblical passages, including the miracle of the sun standing still at the time of the Israelite invasion (Joshua 10:6-14), and Solomon's prayer for wisdom at the high place were we were standing (1 Kings 3:3-4). But I spent most of our devotional talking about the prophet Samuel, recalling his miraculous conception and birth, his call from the Lord as a child, his judgeship, and his role in anointing first Saul and then David as king of Israel.  That gave me a chance to testify of the role of prophets, after which we sang "We Listen to a Prophet's Voice" (hymn 22).


Our next stop was the church and tower at Augusta Victoria, the Lutheran church on Mount Scopus just south and east of the BYU Jerusalem Center.  The tower affords good views in all four directions, so Jared took half the students up the tower to look west to Jerusalem, south to Bethany and the Herodion beyond Bethlehem, and east to the Judean Wilderness, the Jordan River, and the Dead Sea.  Meanwhile, I kept the students in the sanctuary and taught them how to "read" a church, noting the different standard parts of a Catholic or Protestant church.  Then, to honor Martin Luther, we sang "A Mighty Fortress Is Our God" (hymn 68), after which we also sang "All Creatures of Our God and King" (hymn 62).  After discussing the importance of the nearby Mount of Olives in the ministry of Jesus and its role at his future return, we sang one of my favorites, "All Glory, Laud, and Honor" hymn 69), which got me excited at the prospect of spending Holy Week here this year.


Our next stop, the Seven Arches Overlook, has no historical or religious significance on its own, but it provides one of the best views of the Old City and especially the Temple Mount as well as the cemeteries below it on the Temple Mount.  This was exciting for the students since it afforded the students their first really good look at the Old City. 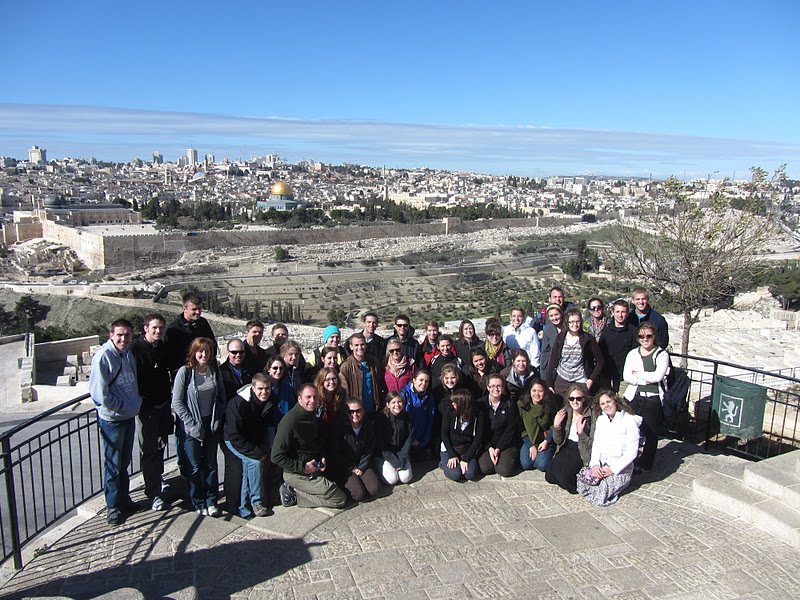 We then drove south, almost to Bethlehem, to Mar Elyas, a Greek Orthodox monastery that provides a good southern view.  After pointing out some "political geography," such as the Israeli settlement of Har Homa juxtoposed to the Palestinian modern city of Bethlehem, we talked about the Way of the Patriarchs of "Ridge Route," as well as Joseph and Mary's arrival in the biblical town of Bethlehem that fateful first Christmas.  And even though Christmas is over, we sang Christmas carols nonetheless!

Driving back to Jerusalem, we stopped at the Haas Promenade, which gives the first view of Jerusalem when approaching from the south.  After I explained the geography, Jared reviewed the story of Abraham bringing Isaac to Mount Moriah, purportedly to sacrifice him (Genesis 22:1-6, n.b. v. 4, "Abraham lifted up his eyes and saw the place afar off.") and movingly compared the story to the sacrifice of Jesus Christ.  I followed by talking about how the sacrifice of Christ had removed all enmity between us and God so that we never need fear approach him again, the temple no longer being so much a place of sacrifice but a place of joy and communion.  We then sang, "Beautiful Zion Built Above" (hymn 44). 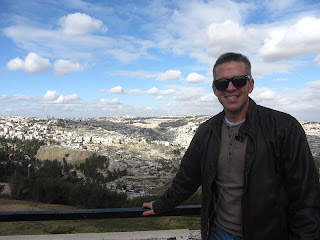 That officially ended our Overlook field trip, but we had one more stop before we went home.  The bus let us off at Hebrew University, just north and west of our BYU Center.  The purpose was to familiarize the students with the bus and computer services available at the university, but it also afforded some good views itself.