Valley of the Doves 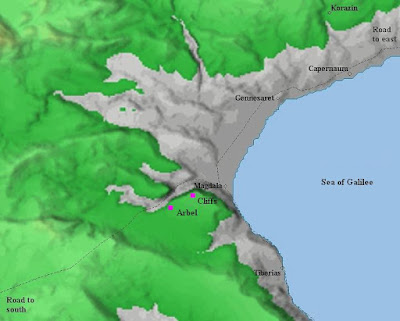 We started our first day in Galilee with a devotional and walk in Wadi Hamam, or "The Valley of the Doves." Under the cliffs of Mount Arbel, this valley marks the route of the branch of the old Via Maris, or "Way of the Sea" that led from the coast inland towards Damascus and eventually to Mesopotamia. Because it passed near Nazareth on its way to the Sea of Galilee, this was doubtlessly the route that Jesus would have taken as he walked from his home town to the Sea of Galilee, where so much of his mortal mission took place. 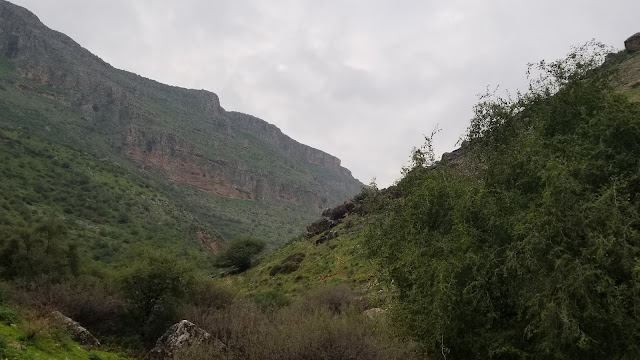 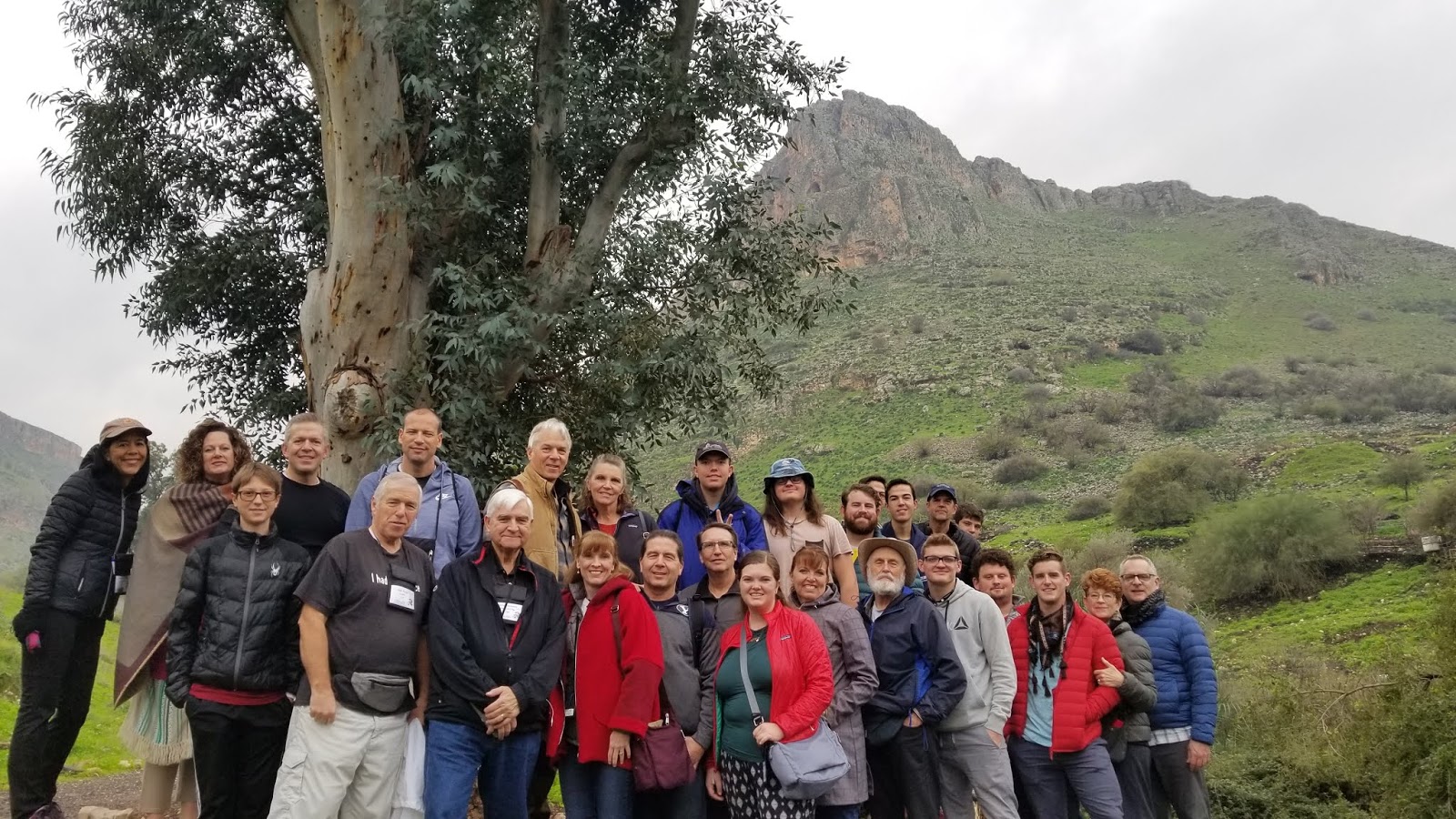 At the mouth of the Valley of the Doves we read Matthew 4:18–20, sang “Come, Follow Me,” and offered a prayer before we walked up the trail in silence so that our group had time for meditation, thought, and their own prayers. 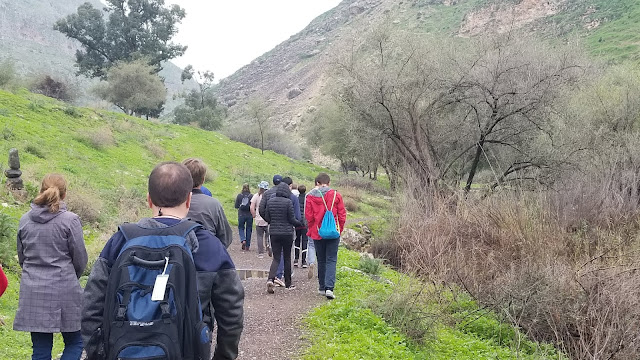 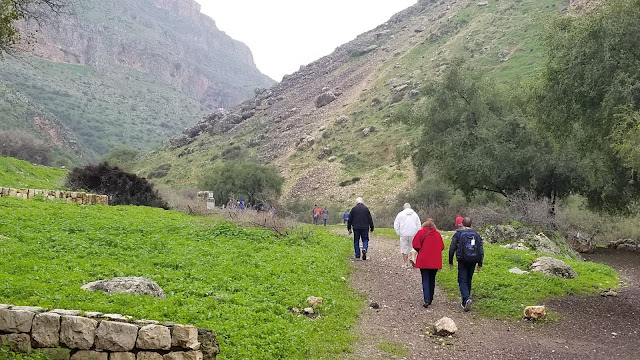 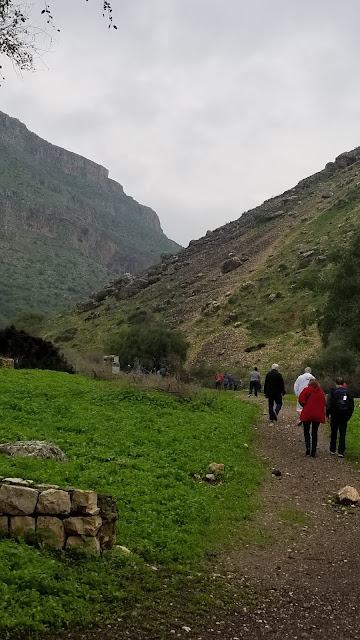 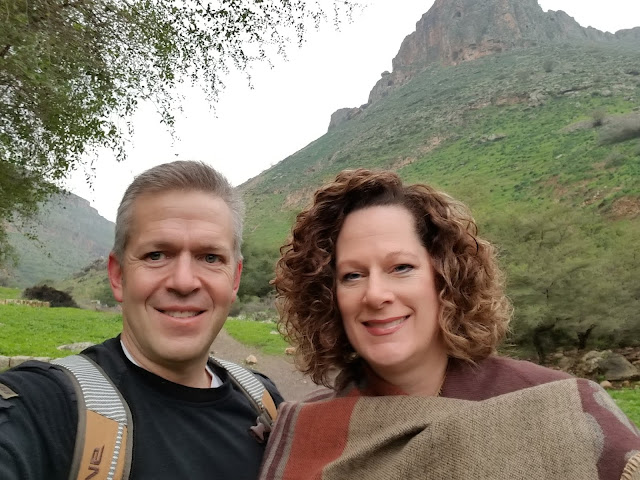 Church of the Multiplication

Rami then drove us to Tabgha, where we gathered for our devotional in the atrium of the Church of the Multiplication. Read Mark 6:41–44, mentioned parts of the Bread of Life Discourse from John 6, and read 3 Nephi 20:8–9 before singing “Bless Our Fast, We Pray,” which has lines about feeding our souls and filling our hearts.

After visiting the church, we continued on to the Mount of Beatitudes, which is always one of my favorites. We read Matthew 5:1–12, talked a bit about the intent of the overall Sermon on the Mount, and then read Matthew 5:48, offering a control on unintended and unhelpful perfectionism. Sang “More Holiness Give Me.” We then had some time on the lovely grounds. 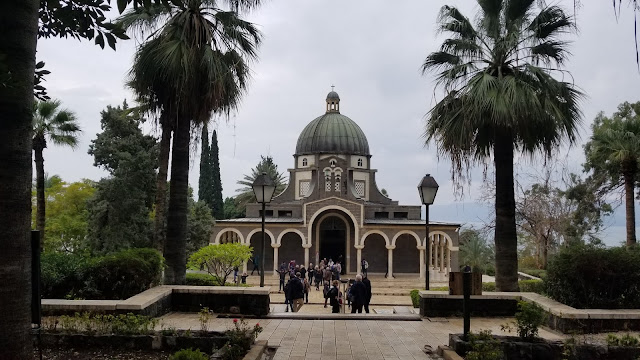 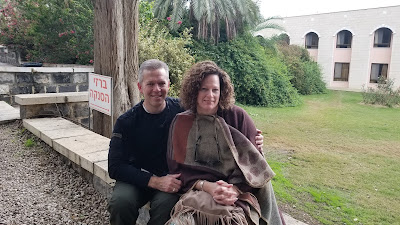 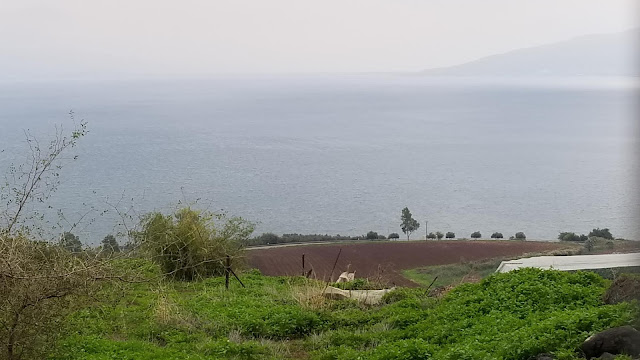 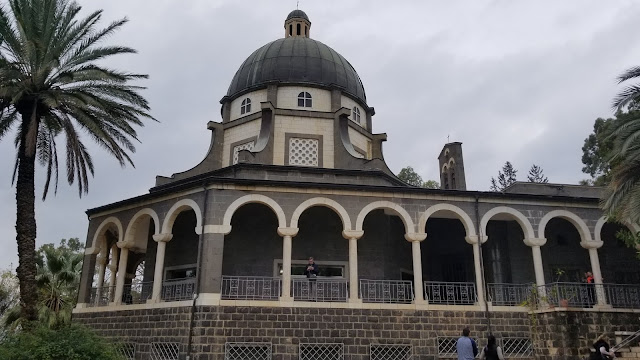 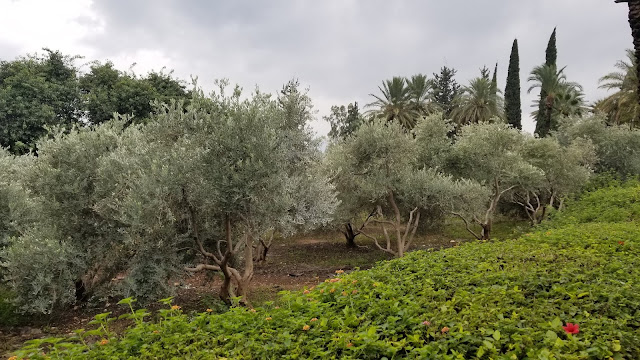 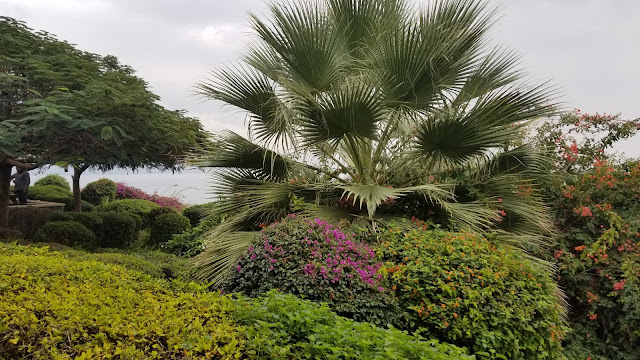 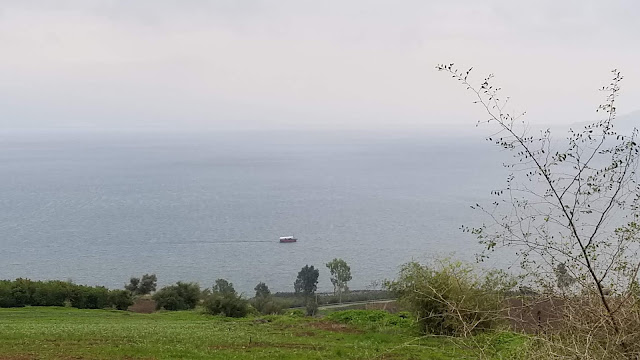 We then made the long drive to Caesarea Philippi, where the water at Banias Falls and at the site itself was higher and flowing more strongly than I have ever seen it before. All the water, and the greenery of the winter season, were another difference of this winter season tour. 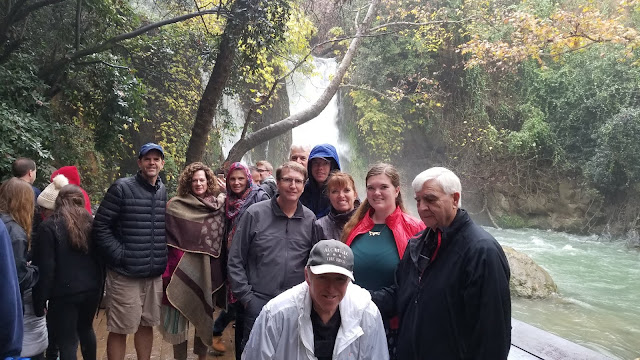 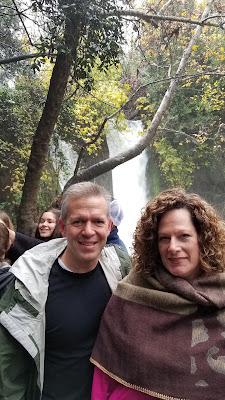 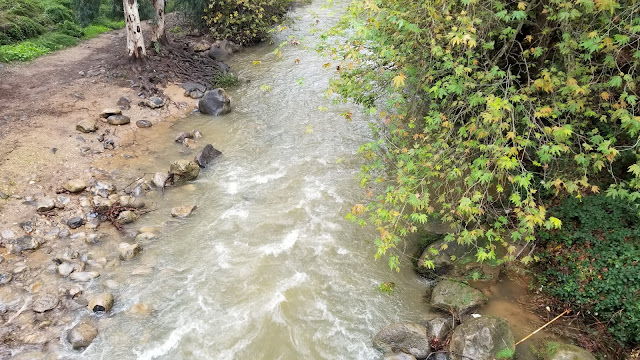 At Caesarea Philippi itself, we talked about Peter’s Confession in Mark 8:27–30 and Matthew 16:13–20 and sang “I believe in Christ." One of the three headwaters of the Jordan River actually emerges from a cave just above the classical site, which in Jesus' time was the capital of the tetrarchy of Herod's son Philip. In the Hellenistic Period a sanctuary to the nature god Pan had been built here, which is still recalled in the Arabic name for the site, Banias. Herod had also built a temple to Augustus here, and all this paganism puts the declaration of Jesus in a different context. Here was the true Son of God.

It later was the capital of a small kingdom given to Agrippa II, a great grandson of Herod the Great and the son of Agrippa I. 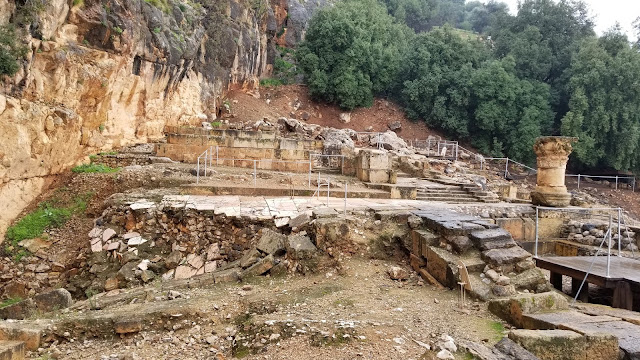 Sala showed us parts of the site I have never seen before, such as the Roman bridge, the nineteenth century flour mill of the now destroyed Syrian village of Banias. 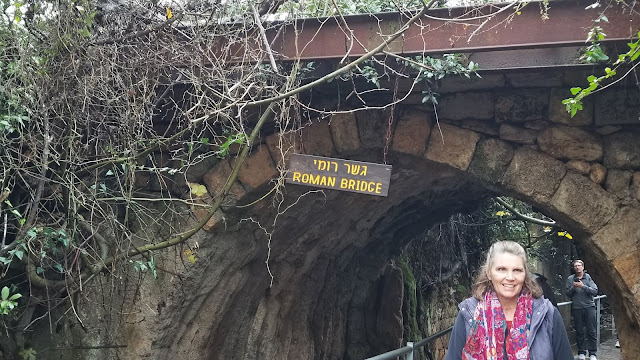 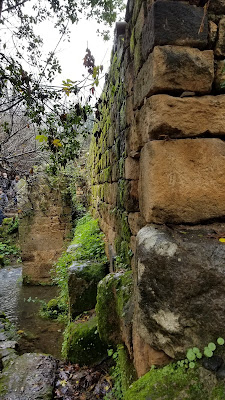 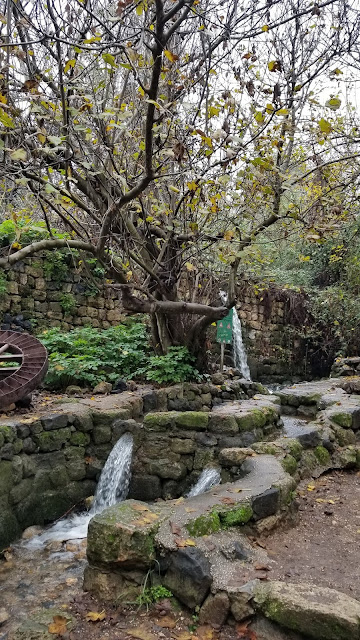 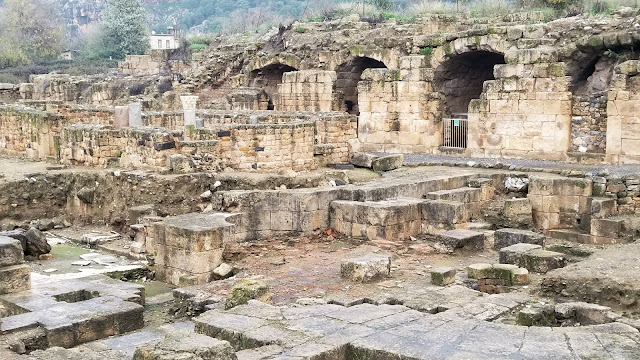 We then drove to Har Bental but could not see anything because of clouds and mist. That notwithstanding, we really were blessed: while it rained through the day, it always seemed to slow or even stop when we were at the important sites.


Came back to the hotel, had dinner, and then ran our devotional in lieu of a Sabbath sacrament meeting. We sang “Come, We That Love the Lord,” after which Sister Belnap prayed. I introduced the theme of coming to Christ with Moroni 10:32–33 and then Elaine spoke quite effectively, and movingly, about coming to know her Savior despite cynicism. I then talked about coming to Christ through the scriptures, recounting my conversion to the Book of Mormon through 2 Nephi 33:10–11; through ordinances, reading the sacrament prayers and sharing the story of the first time Samuel passed the sacrament; and through revelation, citing the confession of Peter, the Beloved Disciple’s recognition of the Risen Lord in John 21, and the promise of D&C 88:66. We then sang “Come unto Jesus” and Brother Strong prayed.
Posted by Eric D. Huntsman at 7:35 PM