Today we had a sobering field trip to Yad VaShem, the official Israeli Holocaust memorial (click here for the official web site).  My camera battery gave out part way through, so in this instance many blog visitors will certainly want to see the blog post from last semester, especially its pictures from the Hall of Names at the end. 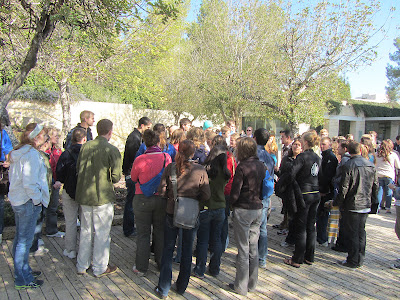 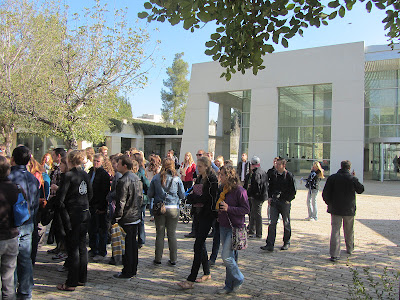 A poignant sign near the entrance has a line from Ezekiel 37:14, "you shall live again, and I will set you upon your own soil." 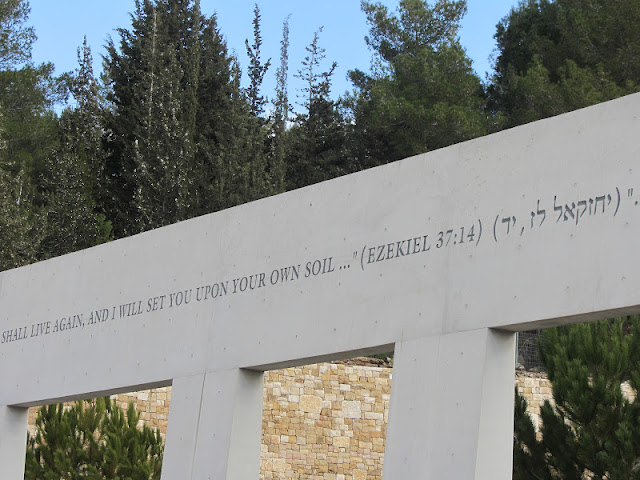 Before we went into the main part of the museum for a two-hour self-guided tour, Ophir Yardin, our Modern Near East (Israel) and Judaism adjunct faculty, gave our students an hour-plus orientation.  This was done outside, primarily on the "Avenue of the Righteous among the Nations," where carob trees commemorate Gentiles who risked their lives to save Jews, and in the plazas commemorating the Warsaw Ghetto Uprising and the dead of the concentrations camps.

The main thrust of Ophir's orientation is not so much to provide a background to the Holocaust, which our students read about for their class, but to trace the development of changing Israeli attitudes towards the Holocaust and the issue of victim-hood.  For instance, when the memorial was established in 1953, the emphasis was on those who resisted the Nazis and died fighting as opposed to those who passively went to their deaths.

Critical events in Israel's history, such as the 1967 War and the Munich Olympics massacre of Israeli athletes further changed these attitudes.  Today a much broader view of heroism sees nobility and strength in the form of teachers who died with their students, for instance, rather than just those who actively fought and resisted.

Coming out of the museum, which chronicles Jewish life in Eastern Europe that was virtually destroyed, the rise of the Nazis in Germany and Europe, and the human tragedy of the "Final Solution" one is almost overwhelmed.  However, the sight of the lovely slopes of Mount Herzl and views of West Jerusalem, lift one's spirits.  And one also exits by walking through the Avenue of the Righteous, a potent reminder that there was still good in the world at a time of such evil. 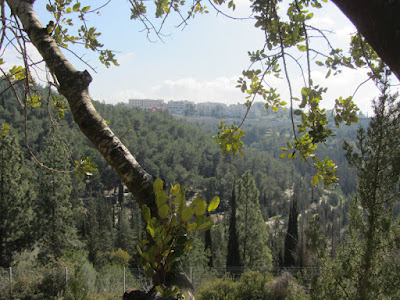