Jordan Day 3: Mount Nebo and Crossing into Palestine and Israel 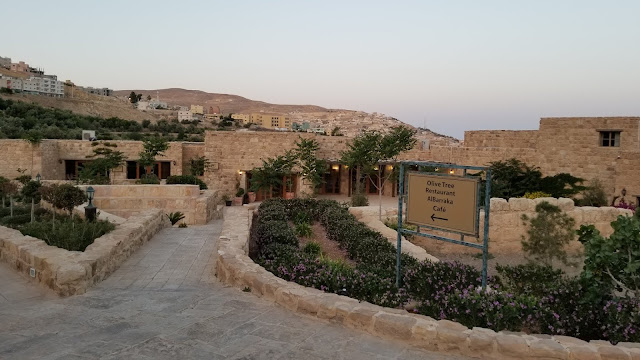 Because Wadi Musa, where we were staying near Petra, is in the far southern end of Jordan, we needed to leave quite early in the morning so that we could make a couple of final stops before we crossed into Israel. We stopped briefly in Madaba, originally a Christian town just east of the Dead Sea, to see a shop where mosaics are made. Mosaics, in fact, made this area famous, because when a Greek Orthodox church in the town was rebuilt, a precious, Byzantine-era mosaic floor was discovered.

Although we were not able to stop at St. George's today, I will mention the Madaba Map briefly to understand its significance and prepare us for a discussion of the topography of Jerusalem in its Christian phase. 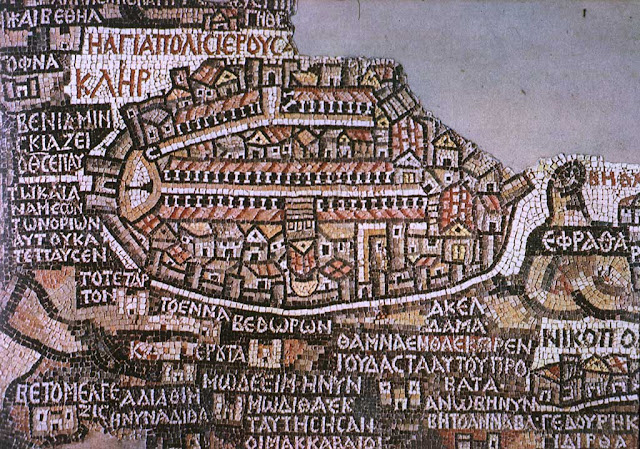 After lunch, we drove up to Mount Nebo, or Pisgah, where Moses was able to view the entire Promised Land before the end of his mortal career. While we cannot be certain exactly where that event took place (Nebo has several peaks), traditionally it happened on the highest peak, known in Arabic as Syagha. A Byzantine church long stood there, and it has recently been rebuilt in an interesting way. A new modern church was constructed over the site of the original, which shelters within many of the amazing floor mosaics and contains some of the original columns, the baptistry, and other original features. Long under construction, this was the first time I actually had a chance to enter it, and it was a neat experience. The appeal was not only historical and aesthetic; I felt the spirit strongly there, being reminded not only of a sacred event but of the tens of thousands of people who had worshiped there. We were moved by the sound of other pilgrim groups singing and praying there.

Coming out of the new church, which was both museum and place of worship, really prepared us for the first real devotional that we have been able to have on our trip. We stood at an overlook that let us look north into Gilead, where the tribes of Gad and half of Manasseh would settle on the east side of the Jordan River (Reuben was to our south) and especially westward, where the modern city of Jericho could almost be seen through the haze. On a clear day one can even see the eastern outskirts of Jerusalem high on the hills above.
After Roberto read from Deuteronomy 32, we talked about how this was a sacred place, where Moses met the Lord. In that, it is a model for other sacred mountains, which are themselves types of temples, places where we reach up to heaven and God reaches down to us. 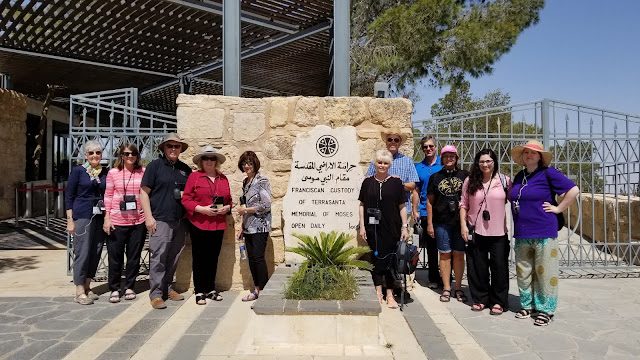 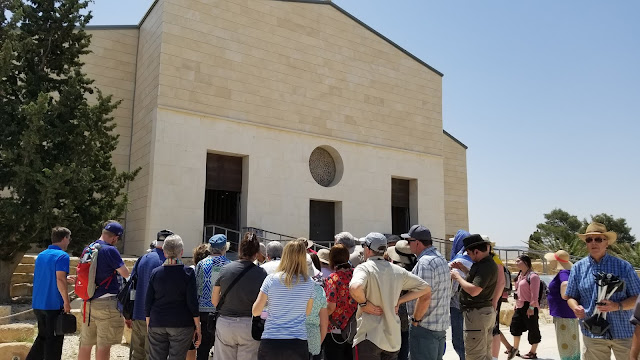 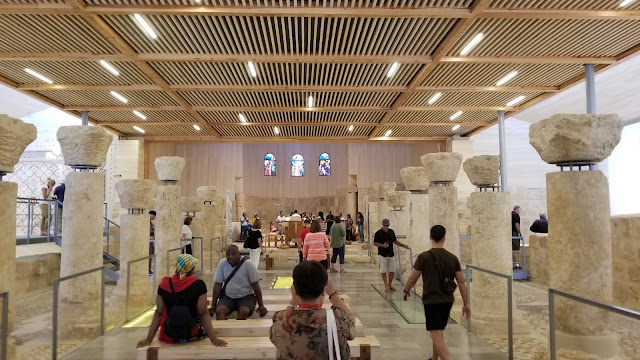 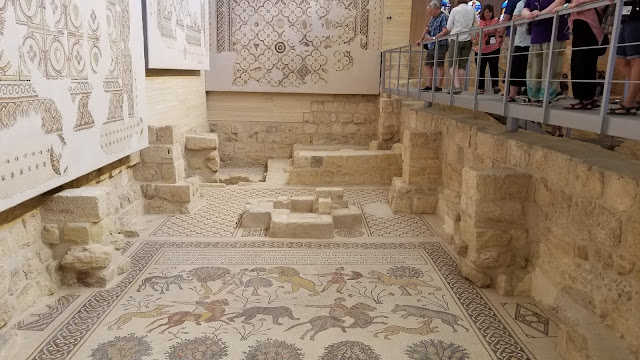 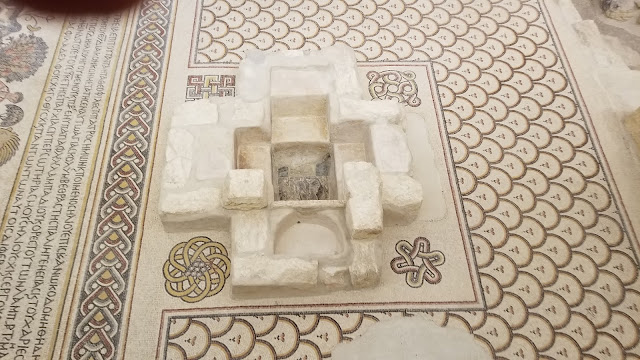 I prefaced my scripture reading and our singing by explaining that this would be a model for our devotionals in Israel, explaining that I wanted to talk about events, people, and places, explicating the biblical stories and then comparing them to our religious walk today. I talked about the symbolism of wilderness wanderings being a type of our mortal probation and Moses' looking into the Promised Land representing out yearning for our heavenly home. We then sang verses 1-4 and 6 of "Redeemer of Israel," that last one being significant because it speaks of Jesus' glorious return.

We took our picture in front of the tall statue representing Moses' snake on a pull, which Jesus compared in John 3 to his being lifted up upon the cross.  We then too two pictures, the first being a set picture and the second one of us "looking to Christ to live." I then asked for, and got, an "amen," not just from our group, but from some other interested bystanders 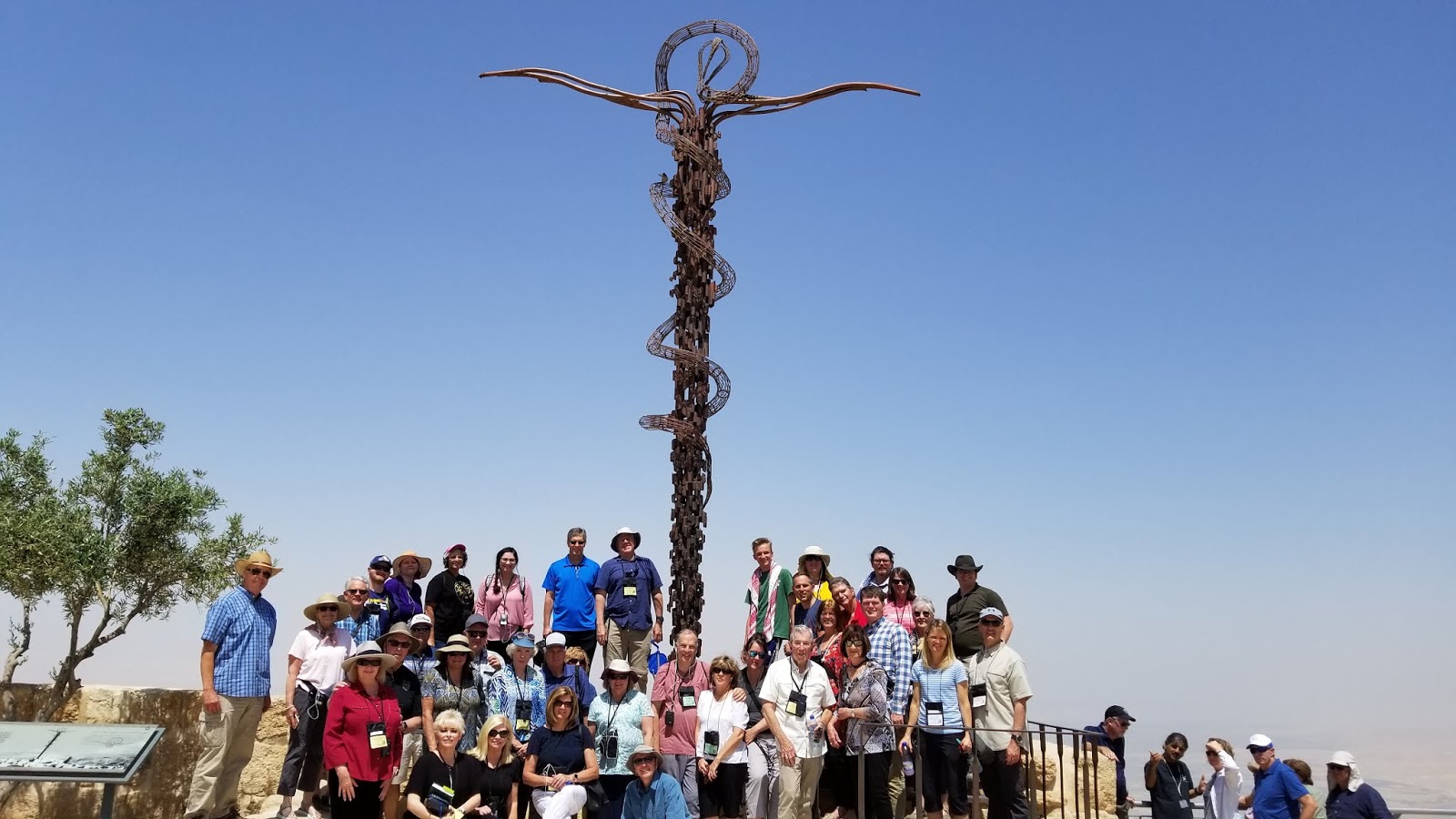 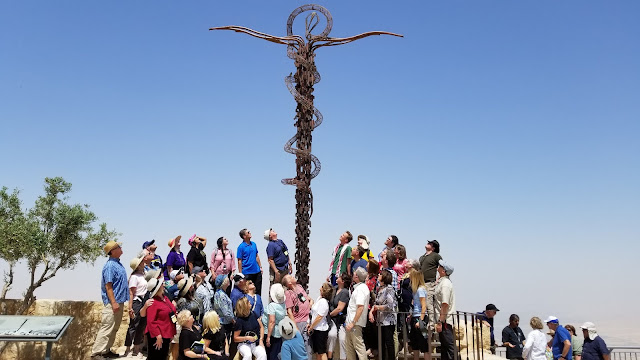 We then negotiated the long and sometimes stressful boarder crossing between Jordan and the Israeli-controlled West Bank before driving up towards Jerusalem. When we came through the Mount Scopus tunnel, I had "The Holy City" playing, an it was quite emotional as we caught out first glimpses of the BYU Center, the golden Dome of the Rock and the Temple Mout, and the rest of the city. We then drove around the city's northern outskirts, negotiating rush hour traffic, and then driving on to Tel Aviv. Paul and I had time to walk briskly from our hotel to Old Jaffa, where we met some others of our group before heading back the hotel for our welcome meeting. Diane Larsen, the owner of Cruise Lady, Tyler Griffin, the other "headliner," were there along with some 30+ new friends who flew in to start the Israeli-phase of our trip. It is a bit sad because half of my Jordan group will now be on the other bus, but conversely I will have another 20 some people in mine. 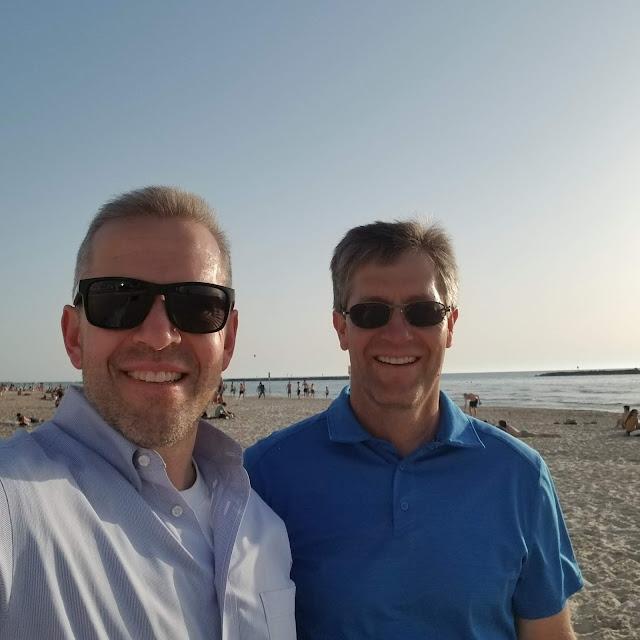 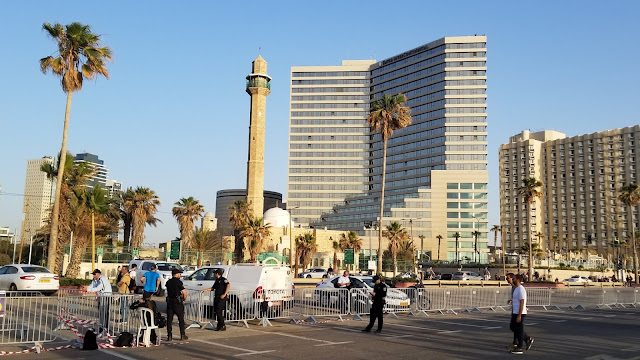 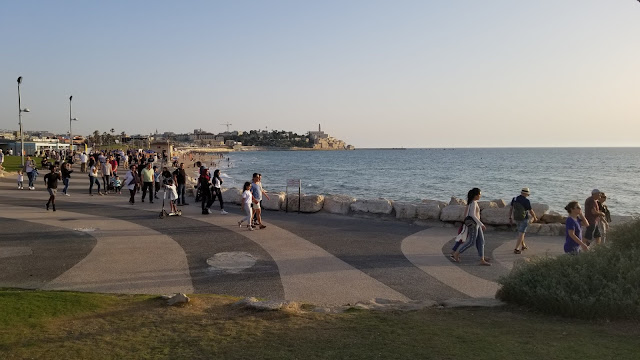 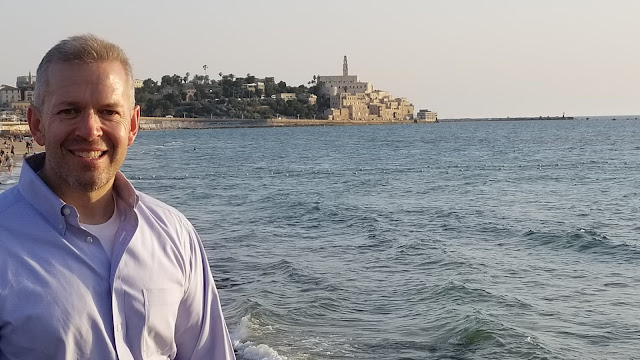