Today we took our students on a field trip of important sites in the region called the Shephelah, which is the area of low hills between the Judean highlands, where cities like Jerusalem, Bethlehem, and Hebron lie, and the coastal plain, which was anciently controlled by the Philistines in the south and Canaanites in the north.  Take a look first at today's highlights video: 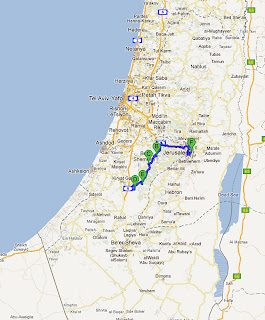 The hills are cut east to west by five valleys, each one of which was controlled by a major fortress.  The Israelites took control of the highlands (except for Jerusalem) under Joshua and started to settle the lowlands.  But in the books of Judges and 1 Samuel, the Philistines exerted constant pressure on them, coming up the valleys from their cities on or near the coast.  David later put an end to this threat and took Jerusalem.  In the monarchy the fortresses in this area were strengthened to protect the heartland of the Kingdom of Judah against new invaders such as the Assyrians and the Babylonians.

Leaving Jerusalem (A), we traveled first to Beit Shemesh (B) in the Sorek Valley, which witnessed the early life of the hero Samson.  We then went to Azekah (C), which controlled the Elah Valley, where the young David confronted the Philistine champion (and "giant") Goliath.  We then went south to the fortress of Lachish (D) before heading back to the site of the fortress of Maresha (E) and then returned home.

Because this field trip was held on a Sunday rather than the usual Monday, many of the faculty families were able to attend, including my daughter, Rachel.


Bet Shemesh and the Samson Story

Beit Shemesh means "House of the Sun" and helped control the Sorek Valley.  The root of the Hebrew word for "sun" contains the same letters as the name "Samson," who was the hero of the Book of Judges who stopped the Philistine expansion inland.


After I gave the back story, we read the account of his miraculous and conception in Judges 13, as seen in this video clip.

Samson was a problematic hero, however, whose weakness for Philistine women led to his demise.  This led us to draw contrasts with the prophet Samuel, likewise miraculously conceived, after which we sang "Choose the Right."


Azekah and the Valley of Elah

The Philistines also tried to advance up the Valley of Elah.  King Saul brought an Israelite force to try to stop them, but their champion, the giant Goliath demoralized them.  We read the story of David and Goliath from 1 Samuel 17 from the site of the later hill top fortress of Azekah, overlooking the probably battlefield in the valley below. 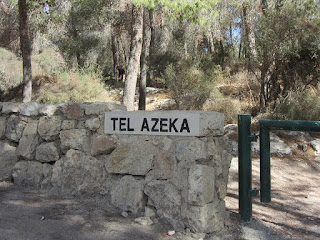 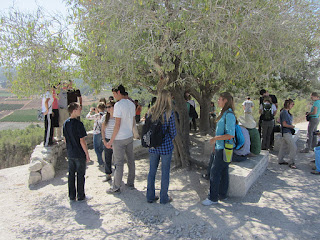 After singing "Who's on the Lord's Side, Who?" we went down to the wadi (or seasonal riverbed below) where David probably faced the "giant" Goliath.  Two of my students read the dialogue of David and Goliath, after which the students tried their hands at flinging stones with slings. 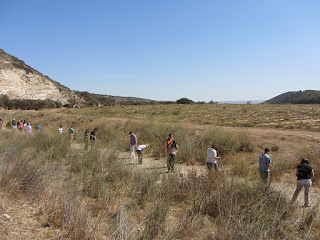 Lachish guarded the southernmost valley in the Shephelah. Mentioned briefly in the book of Joshua, this fortress is known mostly from 2 Kings, 2 Chronicles, Isaiah, and Jeremiah.  Defending the approaches to Hebron, Devir, and the entire Judean highlands from the south, it was attacked, and take, first by the Assyrians and then the Babylonians.  It was built on an impressive location and was very powerful, but this did not keep it from being taken and destroyed.  After surveying the site, we sang "A Mighty Fortress Is Our God," reminding ourselves that the only true safety comes from the Lord. 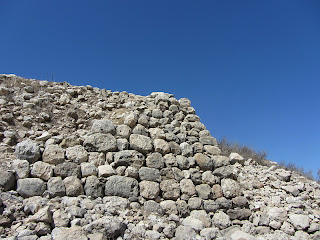 The last site we visited was Tel Marisha, which controlled the Guvrin Valley that leads up to Hebron.  Although described briefly in 2 Chronicles, it was more important in the intertestamental and then Roman periods, when it was known as Merisa and later Eleutheropolis.  After the Kingdom of Judah fell to the Babylonians, the region was occupied by Edomites, who are known in the New Testament as Idumeans. In fact, Herod the Great is identified closely with this site, perhaps having been born here.

It is known for its extensive caves, that were dug into the soft chalk of the region.  Some were used for storage and olive presses.  Others were used for columbaria or "dovecotes."  In Rome and columbarium was most often a catacomb with niches for funerary urns, but here they larger niches seem to have actually been used for doves, which may have been raised for food, sacrifices, or even fertilizer.  Other very large "bell caves" were excavated in the Byzantine and early Islamic period for lime used in mortar. 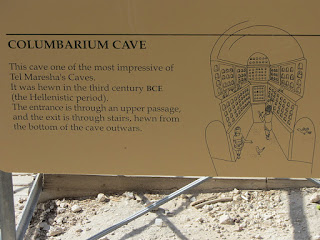 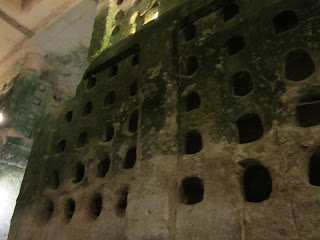 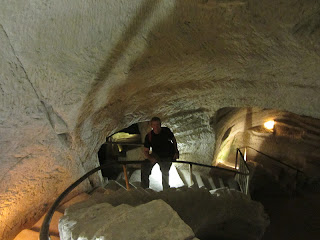