The Citadel "of David"

Sunday is usually our "free day" (remember that we have church services on Saturdays here), but because I spent the entire day yesterday with the students on a field trip, I had today off instead. Because the children still had school as usual, I was able to spend the whole day with Elaine.

We drove around the the west side of the Old City and parked in the Mamilla Shopping Center, which is right below the Jaffa Gate.  This gave us quick and easy access to the Old City, especially since our objective today was the Citadel, a fortress with a long history that was built and rebuilt in successive centuries to protect the west side of the city.

Although it is called the Citadel or Tower of David today, it has nothing to do with that great king. It was probably first built by the Hasmoneans in the second century B.C. and then heavily fortified and expanded by Herod the Great, who built a palace for himself just south of three great towers.  When the Romans destroyed the city in A.D. 70, Titus left Herod's towers standing and made the area the camp of the Tenth Legion that thereafter garrisoned the devastated site of the Holy City.

Later when the Romans had rebuilt Jerusalem as a non-Jewish city, later Byzantine Christians assumed that such an important fortress must have been the palace of King David.  Subsequently the Crusaders perpetuated this misunderstanding when it became the palace of the Latin king of Jerusalem.


The Arabs retook the site, and later it came under the control of the Mamluks from Egypt.  Then the Ottoman Turks rebuilt it in 1537 as part of building the current walls of the Old City that were completed in 1538.  The British took Jerusalem, and the Citadel, from the Turks in 1917.  After the 1948 War, Jordan held onto it and the rest of East Jerusalem, but the Israelis took it in 1967. 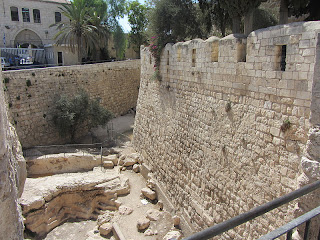 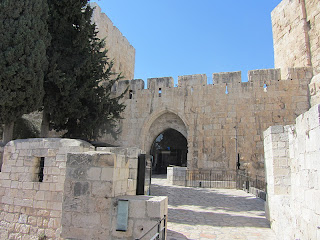 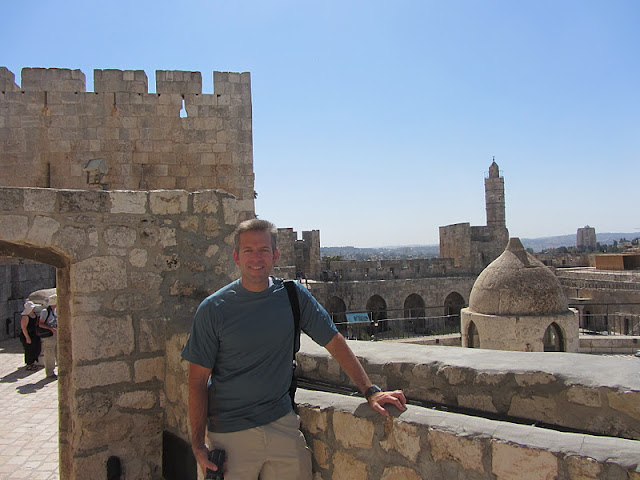 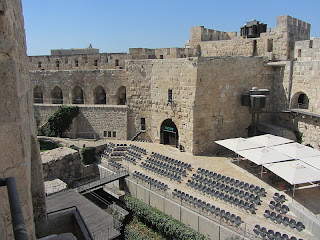 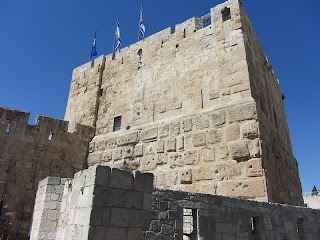 The top of the tower built upon the base of Herod's old Tower of Phasael (named for his brother), provides a great observatory for looking over parts of West Jerusalem on the west and the Old City and the Mount of Olives to the East.  I had a few problems with my wireless microphone (we'll get that sound right yet!), and I failed to tell Elaine to "zoom in" on certain things . . . my instructions to just "focus" on the Mt of Olives cemeteries and the BYU Center were misleading . . . so you will be seeing a better "Survey of Jerusalem from the Citadel" in a few weeks.


We had planned to go to the Austrian Hospice in the Muslim Quarter for lunch after tgat, hoping to enjoy their great Weiner Schniztel.  But Elane had not yet been to the Church of the Holy Sepulchre, so we went there first and that took much or our remaining time. 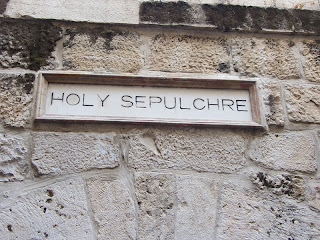 I was a little nervous taking here there, because although the site means so much to me, I know that it can often be a turn-off for Westerners who are not as familiar with Catholic and especially Eastern Orthodox patterns of worship (lots of lamps, icons, incense, and rituals).  That in itself does not bother me, but the CROWDS, some pilgrims but many just pushy pilgrims snapping photos and talking loudly, can distract from the sanctity of the place.  This site may well be the place of the crucifixion and the nearby burial and resurrection: early tradition and archaeology support it in many ways.  But coming here makes it clear why some Protestants and most Latter-day Saints prefer the Garden Tomb.  The quite peace and the spirit of contemplation and worship that pervade that latter site may explain why some Latter-day Saint leaders have felt so strongly about it and why some LDS tour groups do not even come to the Holy Sepulchre.


But to Elaine's credit, after we had climbed up to the Greek Orthodox Golgotha chapel, looked at the pilgrims at the unction stone, and walked around the aediculum or little shrine over the purported Tomb of Jesus, had us sit down on a side bench in the Catholicon or worship area.  She said that despite all the other accoutrements of worship, just being near where these cosmic events may have happened was worth it.  And then at last the spirit came to us in great measure.

I think that when I bring Rachel we will come quite early in the morning before the crowds of pilgrims, and especially tourists, arrive.  I want her to see the church without all the people and be able to take it in on its own merits and feel something without the distractions.  That is when I will probably try to get some video footage as well.

We stopped by the neighboring nice Lutheran Church of the Redeemer, built by Kaiser Wilhelm II in 1898.  It is a beautiful, simple structure, and the more familiar Protestant lines of worship and decoration felt more familiar.  We then had lunch in on Muristan Street, a surprisingly wide and quiet lane that contrasts with most of the crowded and busy streets of the Old City.