Jericho and the Desert 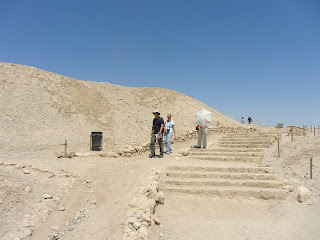 Today then faculty and their wives went on a "pre-field trip" to Jericho and the Judean Wildnerness.  We were joined for the first time by Andy and Janet Skinner.  Andy had taken Ray Huntington's place as associate director for academics.  This is his fifth "tour of duty" here in the Jerusalem program, and he brings a wealth of knowledge and experience.  I will miss Ray and Sandy, but I am looking forward to working with the Skinners.

I also loved having Elaine with me on one of these trips.  Now that the children are in school, she is able to do a lot more of these things.

Jericho, both ancient and modern, lies in the territory that is fully run by the Palestinian National Authority.  It was interesting to pass their checkpoint and see the Palestinian flag waving in an official capacity.  We passed a really big hotel that was built to support a casino that was started in the heady days immediately following the Madrid Conference and the Oslo Peace Accords, when Jericho was one of the first areas turned over to Palestinian control and Israelis flocked here in large numbers.  All that has ended, for now at least.

Besides being the lowest inhabited place on earth (well below sea level), Jericho is also the oldest city, with archaeological evidence suggesting that it was settled as early as 9,000 B.C.   In addition to being the place where Joshua began the Israelite invasion of the territory west of the Jordan River, it was also near where Elijah hid from Ahab, where he later called Elisha as his successor, and where Elisha healed the waters of the spring (Jericho is an oasis, completely dependent upon the springs in the area). 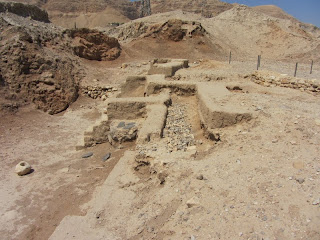 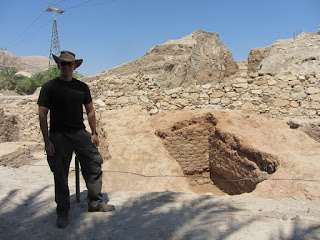 This test video pans the site of ancient Jericho from the top of the tell, beginning with the Neolithic Tower, the oldest known structure from this, the earliest human city. It also shows off Elaine's fancy, glittery, orange toenails.


A brief survey of the Middle Bronze Age walls of Jericho (Joshua and company entered the Promised Land in the late Bronze Age, but this gives an idea)


Jericho was known as "the city of palm trees," and was an important source of dates and balsam.  It was also the "St. George" of the Holy Land, serving as the warm, pleasant winter retreat for kings.  Herod famously built a massive palace here. 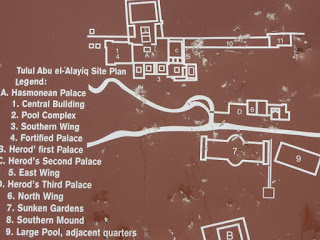 Jericho was also a New Testament site.  Here Jesus cured blind men, and, most famously, called the tax collector Zacchaeus down from the sycamore tree to follow him.

On the way back to Jerusalem, we stopped in the Judean Wilderness at the point revered as the place where Jesus spent 40 days in the wilderness fasting and was tempted by Satan.  It is certainly barren, but there were still bedouins on hand to try to sell trinkets and give camel rides! 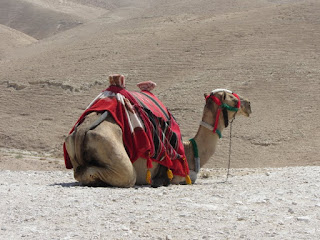 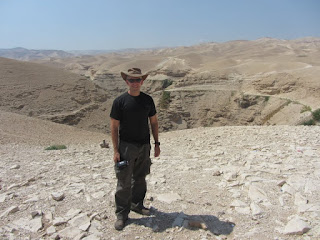